Would it not be cool to have two operating systems interweaved in the same machine in a seamless manner? What if you could be running Ubuntu and alongside with its ‘normal’ windows, you could just have your favourite Windows applications running as if they were running natively? It would be awesome, right?

Well, if this is still an utopia for you, then you are probably missing out on VMWare’s Unity functionality, available since the version 6.5 on their Workstation platform.

What’s Unity you ask? I say it is the best damn thing ever invented.

So in practice, you can be running Ubuntu (or any other flavour of Linux) and have Adobe’s Photoshop or Microsoft Word running right there, alongside Gnometrix or any other of the applications that you can run under Linux. The opposite also works. As a matter of fact, I’m running Vista as we speak and I am developing under Netbeans on Ubuntu. Neat eh?

I cannot begin to address the multitude of possibilities that this opens. It is still buggy but even when you have applications that still can’t run on Vista, you can just have a virtual machine running XP and your applications can run straight off along the other windows. It’s just the ultimate invention.

I’ll leave you with a printscreen since an image is worth a thousand words. 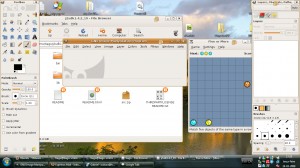